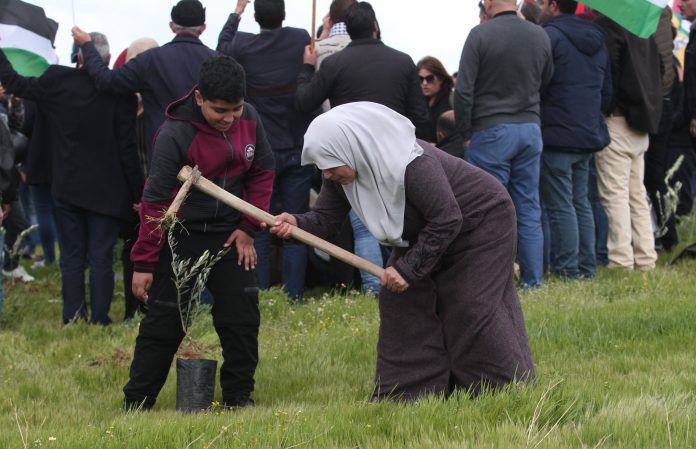 In a blatant act of unprovoked vandalism, Israeli settlers continued to destroy olive groves belonging to Palestinian farmers last week. Hundreds of olive trees and grapevines were uprooted on Friday in the Al-Khader neighborhood, in the Israeli-occupied West Bank, as reported by the Middle East Monitor.

Israeli settlers uprooted 300 trees on the farm of a Palestinian farmer, Naser Ismail Marzouq, in the area of Zakandah, which lies between the settlements of Daniel and Eliazar. The 200-year-old olive trees and 80 grape vines on the farm of Marwan and Anas Salah were also uprooted, which is located near the settlement of Eliazar, according to local sources.

Olives are perhaps the most well-known and abundant Palestinian product, with trees lining valleys and terraced hillsides throughout the occupied West Bank. The first rains after the hot summer months are the signal for farmers to begin harvesting their crop, but it can come with risks.

More than 7,000 Palestinian-owned trees were vandalized in 2018, according to the U.N. In the whole of 2017, it was less than 6,000, the year before only 1,600. In many places, Palestinian farmers say they face intimidation and violence from nearby settlers and call in support from foreign and Israeli supporters, including Jewish rabbis, to protect them and their crops. Rights groups also charge that Palestinian crops have long been vandalized by settlers without any serious effort by the authorities to stop it. Around 400,000 Israelis live in settlements that dot the West Bank and range in size from large towns to tiny hamlets.

The international community regards all Israeli settlements in occupied Palestinian territories to be illegal and a major obstacle to peace in the Middle East. The area, captured by Israel in 1967, is not sovereign Israeli territory, and Palestinians living there are not Israeli citizens and do not have the right to vote. Palestinian towns and villages in the West Bank are frequently targeted by extremist Jewish settlers. Israeli daily Haaretz reported last year that settler attacks on West Bank Palestinians had tripled in 2018, with at least 482 separate attacks recorded last year, up from 140 attacks in 2017. According to the newspaper, attacks ranged from assaulting Palestinians and vandalizing their property to cutting down trees belonging to Palestinian farmers.

As Israel is heading to the polls on Monday for the third election within a year, Israeli Prime Minister Benjamin Netanyahu, who failed to win a majority of votes in previous elections, has embarked on a settlement building spree and has promised to annex the strategic Jordan Valley. Soliciting support from Jewish settlers for the run-up election, Israel approved last week the construction of 1,800 illegal settlement units in the occupied West Bank.

Coronavirus pandemic proves the world is bigger than 5 failing UNSC...