Fearful of Covid-19 and unable to access healthcare, tens of thousands Afghans are fleeing Iran. But is Afghanistan better poised to help?

For nearly a month, whenever Rafih called his family in Tehran, he noticed that each member sounded sick.

But the worst was his 60-year-old grandmother. “She was always coughing and coughing over the phone,” the 26-year-old waiter at a hip Kabul cafe said.

For weeks, starting in mid-February, the family, who had fled to Iran during the Soviet occupation of Afghanistan, went from hospital to hospital, seeking a diagnosis for their ailing grandmother.

‘Imagine, had she been treated in time, we wouldn’t be in this situation’

However, this was just as reports of thousands of Covid-19 cases in the Islamic Republic were making headlines around the world.

At each hospital, the family found themselves among hundreds of patients. By the time their turn came, the response was always some variation of, “We can’t treat her … we have too many of our own [Iranian] patients … don’t bring Afghans to us,” Rafih said.

Making matters worse was the fact that three of the younger women in the house, aged between 17 and 25, started to exhibit their own symptoms that, to Rafih, seemed a lot like the coronavirus he had heard so much about.

“My oldest aunt couldn’t even speak,” he added. 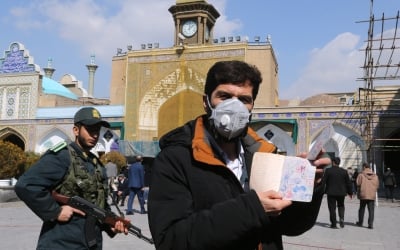 Coronavirus: Iranian official says one person dies ‘every ten minutes’ in the country

As all this was happening, Rafih’s father, in his mid-40s, was recovering from recent open-heart surgery in a small, two-bedroom apartment, now full of sick people.

“The doctors told him if he catches Covid-19, he won’t survive for more than two days,” Rafih said.

The ailing father had no choice but to self-isolate for a period of 20 days, but in such a small space shared with at least five other people at any given time, even that proved difficult.

This carried on for nearly a month until Rafih’s grandmother fell extremely ill one night. Fearing they wouldn’t be taken seriously or helped, the family turned to their Iranian neighbour, the wife of a retired lawyer, to call an ambulance.

“They rushed over right away and, within minutes, they diagnosed her with corona,” he said.

Immediately after, the neighbour asked to have the three young women checked, and they too were believed to have the virus that is causing a global pandemic.

The situation of Rafih’s family is not rare, nor is it limited to just the current coronavirus scare.

Iran hosts around three million Afghan refugees and migrants, including between 1.5 and two million without legal status in the country, and has faced criticism for how it treats them, including those with legal papers.

This includes access to health care, and as such Afghans say they feel subject to discrimination and prejudice when seeking health services.

These challenges have been cited as one of the main factors leading to a massive exodus of Afghans from the neighbouring country in recent weeks.

According to the International Organisation for Migration (IOM), more than 19,000 Afghans left Iran and entered the Western Afghan provinces of Herat and Nimroz during the first week of March.

By last week, IOM reported that the number had grown to more than 53,069 people in a single seven-day period.

According to Afghanistan’s Ministry of Public Health, all of the nation’s 22 Covid-19 cases have come from Afghans who had spent time in Iran.

This phenomenon has placed a particular burden on the province of Herat, which is home to the most-frequently used border crossing between the two nations.

Thirteen of the 22 people infected with coronavirus are currently located in the province which still lacks a health facility devoted entirely to the treatment of the illness.

Last week, 38 patients suspected of having coronavirus, including one who tested positive, reportedly fled the Covid-19 ward of a Herat hospital, citing a lack of food, inattentiveness by doctors and the absence of individual rooms for patients.

This perfect storm of discrimination in Iran and a lack of proper services in Afghanistan has left families like Rafih’s in limbo.

‘They can’t come here and we can’t go there either. No one knows what to do’

Even if they could get adequate treatment at home, it would cost $200 each for tickets to fly to Kabul, or they would have to travel for more than 10 hours on an insecure road with Taliban checkpoints.

“They can’t come here and we can’t go there either. No one knows what to do,” he said.

To add to the family’s worry, they recently got word from the hospital that nothing more can be done for their grandmother. Rafih said his uncle called on Thursday morning to say that doctors made it clear their grandmother had only a few days left to live.

“Imagine, had she been treated in time, we wouldn’t be in this situation,” he said.

Turkish military dismisses more than 5,000 personnel over FETÖ links in...

Melbourne Post - November 19, 2020
0
The Turkish Armed Forces (TSK) continues weeding out its staff suspected of having links to the Gülenist Terror Group (FETÖ) in the wake of...

Australia to scrap harassment exemption for judges and politicians

Pakistani PM says he will upgrade status of part of Kashmir,...

Armenians setting fire homes and forests in Kalbajar in Nagorno-Karabakh