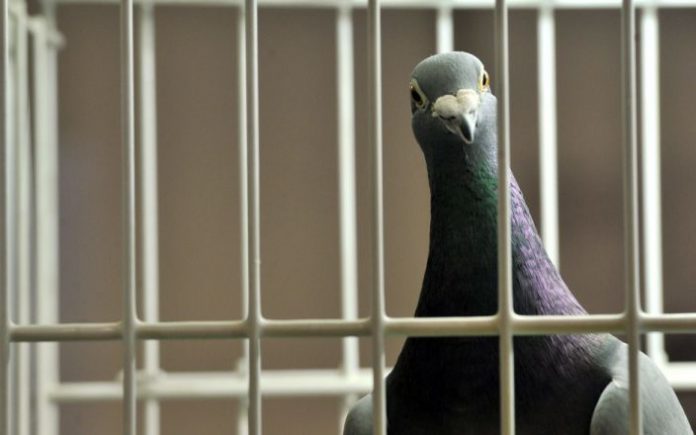 An intrepid Pakistani ‘spy’ pigeon is facing a life behind bars in India.

The allegation was made after Geeta Devi, a resident of the Kathua district of Indian-administered Kashmir, reported a bird – painted pink and carrying a coded ring tagged to its foot – flew into her home on Sunday night.

The Indian Border Security Force passed the pigeon on to the police, who launched an investigation and logged the animal as a ‘Pak Suspected Spy.’

Officials in Kathua said the bird had flown across the border and they would try to decipher the message.

“The pigeon, suspected to have been trained in Pakistan for spying, has a ring with alphabets and numbers written on it,” a police source told the Times of India.

“Though birds have no boundaries and many fly across international borders during migration, a coded ring tagged to the captured pigeon’s body is a cause for concern as migratory birds don’t have such rings.”

India and Pakistan have fought four wars since independence and tension between the two neighbours remains high.

It is not the first time India has claimed Pakistan has used pigeons to deliver secret messages.

In 2015, the Indian authorities captured a bird that had crossed the border and was found to have a message written on its feathers in Urdu – the national language of Pakistan.

To the disbelief of the international community, the bird was x-rayed and ruffled enough feathers to be also logged as a ‘suspected spy’ by police.

According to the police in Kathua, birds are commonly used to send secret messages across the border as they do not typically arouse suspicion.

However, he added the latest suspect would remain in a cage in a police station until the conclusion of the investigation.

Melbourne Post - January 3, 2022
0
The UK's Defence Academy was hit by a cyberattack last year which caused “significant” damage, according to a retired high-ranking officer.

US forces start new training for YPG/PKK terrorists in Syria

Macron of France is primitive in blaming Islam: Ex-Malaysian PM

Half of British people with pancreatic cancer not prescribed ‘essential’ tablets

Pakistan to Introduce a Single Curriculum for All Schools Next Year

£8.7bn written off by Government in relation to Covid pandemic PPE