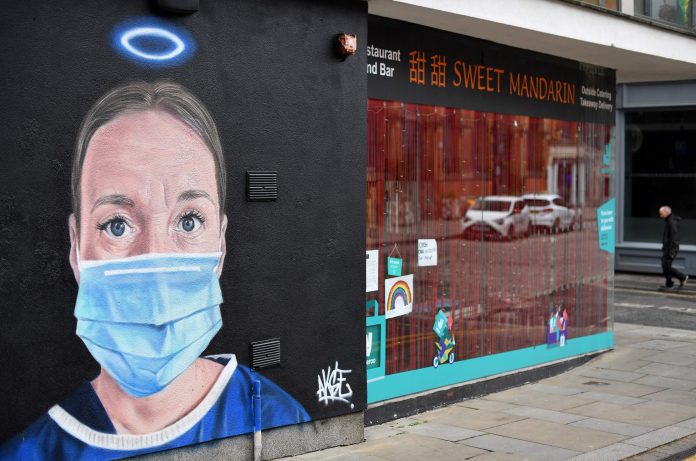 LONDON (AP) — The British government faced pressure Tuesday to act fast to keep a lid on coronavirus infections after a sharp spike in new cases across the U.K. over recent days stoked concerns about the pandemic’s prospective path during winter.

In the wake of figures Monday showing that the U.K. recorded nearly 3,000 new coronavirus cases for the second day running, government ministers and scientists voiced concerns that the easing of the lockdown during the summer has prompted many people, particularly young adults, to let their guard down in a country that has seen Europe’s deadliest virus outbreak.

“This is a big change, it’s now consistent over two days and it’s of great concern at this point,” said Professor Jonathan Van-Tam, the government’s deputy chief medical officer.

“We’ve been able to relax a bit over the summer, the disease levels have been really quite low in the U.K. through the summer but these latest figures really show us that much as people might like to say ‘oh well it’s gone away’ — this hasn’t gone away.”

While noting that the rise is “much more marked” among young people between the ages of 17 and 21, he said there is a “more general and creeping geographic trend” across the U.K.

“People have relaxed too much,” he said. “Now is the time for us to re-engage and realise that this is a continuing threat to us.”

The U.K. has Europe’s worst death toll from the virus, recording more than 41,500 deaths within 28 days of testing positive. The actual toll is believed to be far higher as the government tally does not include those who died without having been tested.

The spike in U.K. cases follows big increases in Spain and France, both of whom have seen the number of COVID-19 patients being hospitalized rising dramatically during the summer.

The worry is that the U.K. will start seeing a big increase in the number of people being hospitalized — and dying — over coming weeks, given lag effects.

“Although we are encouraged to return to the workplace to support jobs, cafes and so on, we need to do so responsibly,” Communities Secretary Robert Jenrick told Sky News.

“As we approach the autumn and winter there is going to be even more responsibility on all of us to keep following the guidelines.”

The government has faced criticism for its mixed messages since it started easing the lockdown, which was introduced in March. It spent much of the summer, for example, encouraging people to go out to help the hard-pressed hospitality sector, notably through an August eating-out discount scheme. It is also now making the case that workers should return to their offices.

Later Tuesday, a local lockdown comes into force in the Welsh district of Caerphilly following a spike in cases. Under the new restrictions, people will not be allowed to enter or leave the area without a reasonable excuse. Everyone over the age of 11 will also be required to wear face coverings in shops — the first time this will be mandatory in Wales. Meetings with other people indoors and extended households will not be allowed, while overnight stays have also been banned.

UK ramps up COVID vaccinations as it faces ‘worst weeks’ of...

A Palestine without Jerusalem, a Jerusalem without Palestine