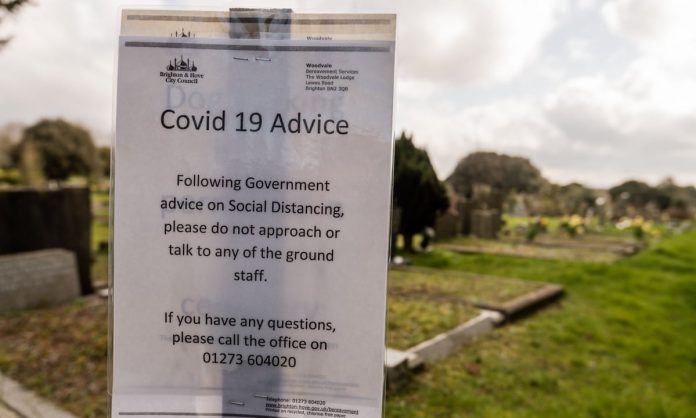 LONDON (Reuters) – As the United Kingdom’s COVID-19 death toll approaches 100,000, Home Secretary Priti Patel said on Wednesday that the numbers were horrendous but that it was not the time to look back at the government’s possible mismanagement of the crisis.

The United Kingdom’s official death toll is 91,470 – Europe’s worst figure and the world’s fifth worst after the United States, Brazil, India and Mexico.

Prime Minister Boris Johnson has been criticised for reacting too slowly to the crisis, failing to supply sufficient protective equipment and for bungling the testing system, although the United Kingdom has been swift to roll out a vaccine.

“Every single death is deeply tragic,” Patel told LBC when asked why the death toll was so large. “There’s no one factor as to why we have such a horrendous and tragic death rate.”

“I don’t think this is the time to talk about mismanagement,” Patel said when asked by the BBC if the government had mismanaged the crisis.

When pressed on the international comparisons of death tolls, Patel told LBC the data was “not comparable”.

British ministers say that while they have not got everything right, they were making decisions at speed in the worst public health crisis for a century and that they have learned from mistakes and followed scientific advice.

There have been calls for a public inquiry from some doctors and bereaved families into the handling of the crisis, but Johnson has resisted this.

Patrick Vallance, the government’s chief scientific adviser, told Sky: “We will have got some things right and some things wrong and we’ve learnt a lot as we’ve gone through this.”

COVID-19 CRISIS
The British government reported a record rise in deaths on Tuesday with 1,610 people dying within 28 days of a positive coronavirus test.

“It’s worth remembering the definition of insanity by Einstein which is doing the same thing over and over again and expecting for a different outcome,” Vallance said.

“The lesson is every time you release it too quickly you get an upswing and you can see that right across the world.”

The COVID-19 death toll and the level of hospital admissions means it is far too early to speculate about when the lockdown may be lifted or eased, Patel said.

“We are still in a perilous situation,” she told Sky. “We have a long way to go.”

Currently the United Kingdom has vaccinated 4.27 million people with a first dose of the vaccine, one of the highest rates in the world per head of population.

Iran asks for first IMF loan in 60 years as virus...

Melbourne Post - March 13, 2020
0
Iran said Thursday it had asked for an emergency $5 billion loan from the International Monetary Fund to help fight the spread of a...