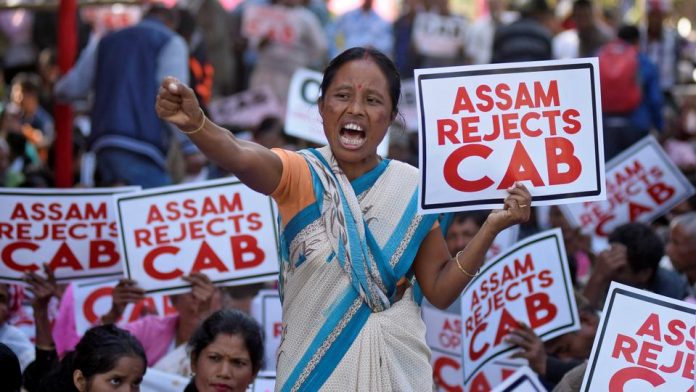 India’s Parliament saw raucous scenes Monday and protests raged in the northeast of the country as lawmakers debated legislation that stands to give citizenship to religious minorities from neighboring countries, excluding Muslims.

The Citizenship Amendment Bill (CAB) provides that Hindus, Sikhs, Buddhists, Jains, Parsis and Christians fleeing persecution in Muslim-majority Afghanistan, Bangladesh and Pakistan can be granted citizenship. Modi’s government had tried to bring in the contentious legislation during its first term but the bill could not pass the upper house where the Bharatiya Janata Party (BJP) and its allies lack a majority. In September, the U.N. called on India to not render anyone stateless after the country’s handling of citizenship rolls in the northeastern state of Assam.

On Monday, 100 scientists and scholars at institutions in India and abroad published a joint letter expressing their “dismay” at the legislation. They said that enshrined in India’s constitution is the notion of treating all faiths equally.

The Muslim community in Assam has been subjected to multiple rights violations as they are considered foreigners by the Assamese community.

Citizenship and illegal migration are volatile issues in the tea-growing, oil-rich Assam, home to more than 32 million people, about one-third of whom are Muslims. In the Nellie massacre in 1983, around 2,000 Muslims were killed in a violent protest by a native Assamese group.

‘Islamophobia on the rise in Germany’