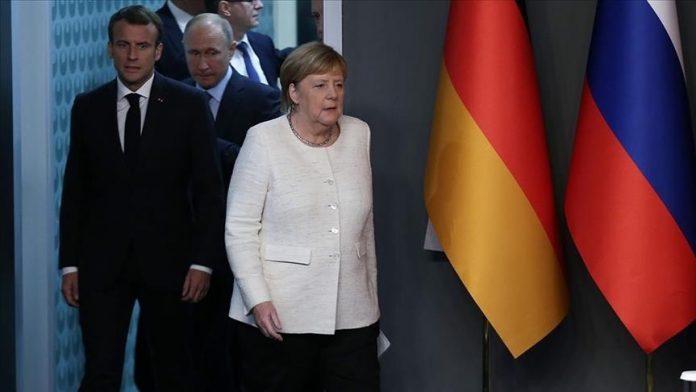 Russian, German and French leaders discussed the fight against the COVID-19 pandemic, use of the Russia’s Sputnik V vaccine in the EU, and the EU-Russia relations at a video conference held on Tuesday.

Vladimir Putin, Angela Merkel and Emmanuel Macron focused on the measures that would prevent further spread of the coronavirus, the Kremlin said in a statement.

“The prospects for the registration of the Russian Sputnik V vaccine in the European Union, as well as its possible supplies and joint production in the EU countries, were discussed,” the statement said.

The heads of the three countries also discussed matters related to the Russia-EU relations, the Kremlin said, adding Putin said his country is ready to normalize relations whenever the EU is ready.

Merkel and Macron asked Putin about the case against opposition figure Alexey Navalny and got “appropriate explanations of the objective circumstances of the case”.

Speaking about the Ukrainian crisis, Putin voiced concern over a possible escalation at the contact line in Donbass.

The three leaders agreed that the Minsk Agreement on Donbas remains the only possible way to settle the Ukrainian crisis and that further work in this direction will continue at the level of political advisors.

Turning to Belarus, Putin stressed the “inadmissibility of external interference” in the internal affairs of a sovereign state.

The three leaders welcomed the stabilization in Libya, and also discussed the situation in Syria.

US fires 424 employees from İncirlik Air Base in Turkey

Melbourne Post - January 22, 2020
0
A U.S. company fired almost half of its 890 employees working in İncirlik Air Base, located in southern Turkey's Adana province. According to a statement...

Aging U.S population to hit economy like a ‘ton of bricks’...

Europe at greatest risk of war in 30 years, Poland warns

British House of Lords could move out of London