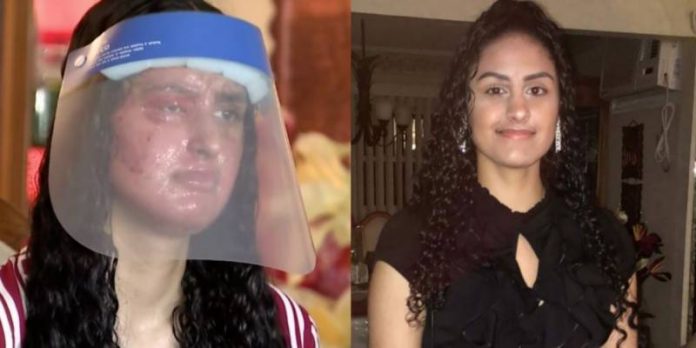 Police in New York City are on the hunt for a suspect who threw acid into the face of a Muslim college student last month as she walked into her home.

A statement from the Council on American-Islamic Relations (CAIR-NY) says 21-year-old Nafiah Ikram spent 15 days in the hospital and was left blinded. Her face, chest and arms were also severely burned.

Surveillance video from outside her home shows Ikram following her mother into the home on Long Island on the night of March 17. A slim man, appearing to wear a hoodie and gloves, races up behind her from the sidewalk, throws the acid, then races away.

Police are offering a $100,000 reward for information on the case.

CAIR-NY is demanding the attack be investigated as a possible “hate crime,” although police have not yet made that determination.

Hofstra University, where Ikram is a student, released a statement, saying the school is “shocked by this horrific attack.”

A GoFundMe campaign has so far raised over $300,000 to help cover Ikram’s medical expenses.

Padma Lakshmi, who hosts “Top Chef” and “Taste The Nation” on the Bravo television network, took to social media to say that she is close with Ikram’s family.

“This is their only daughter; she has her whole life ahead of her,” Lakshmi wrote. “This is the nightmare of any parent for this to happen to your child.”

Melbourne Post - July 1, 2021
0
By Peter Kagwanja Africa was still reeling under the yoke of colonialism when the Chinese Communist Party (CPC) was officially founded on July 1, 1921....