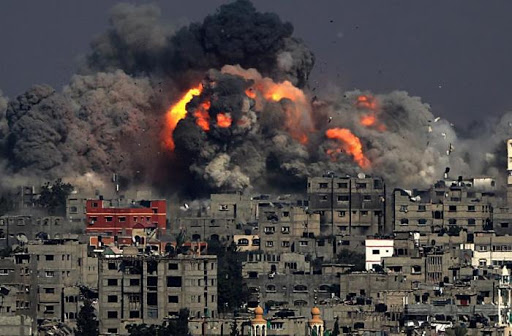 The British government on Monday denounced the firing of rockets at Jerusalem and other parts of Israel but fell short of condemning the killing of at least 20 Palestinians in the Gaza Strip, including nine children, in an Israeli bombardment.

“The UK condemns the firing of rockets at Jerusalem and locations within Israel,” Foreign Minister Dominic Raab wrote on Twitter.

“The ongoing violence in Jerusalem and Gaza must stop. We need an immediate de-escalation on all sides and end to the targeting of civilian populations,” he added.

On Monday evening, Israeli forces once again stormed Al-Aqsa Mosque, assaulted Palestinian worshippers and fired sound bombs that caused a fire to break out in trees inside the Al-Aqsa compound.

Meanwhile, hundreds of Palestinians at the Damascus Gate celebrated as rockets were fired from the Gaza Strip towards West Jerusalem.

At least 20 Palestinians, including nine children, lost their lives in the Gaza Strip on Monday, according to the Palestinian Health Ministry. The ministry said that 65 people were injured.

Earlier, the Israeli army announced the launching of airstrikes on the Gaza Strip.

Palestinian resistance groups launched around 60 rockets, including seven on Jerusalem, while the rest of the rockets targeted Ashkelon, Sderot and settlements near the Gaza Strip.

The rockets were fired in response to continued Israeli aggression at the Al-Aqsa Mosque and the eviction of Palestinian families from the Sheikh Jarrah neighborhood in occupied East Jerusalem.

Also an Israeli was injured when his car was targeted by an anti-tank missile near the Gaza Strip, according to the Israeli army.

“The violence against worshippers during [the Muslim fasting month of] Ramadan at the Al-Aqsa Mosque was shocking,” party leader Keir Starmer wrote on Twitter.

“Israel must respect international law, and must take steps, immediately, to work with Palestinian leaders to de-escalate tensions,” he added.

The movement, representing the community of Jews in the Labour Party, said it was “appalled” by the brutality of Israeli forces shown towards Palestinian worshippers at Al-Aqsa Mosque in the month of Ramadan and that it was opposed to efforts at expanding illegal settlements and demolishing Palestinian neighborhoods.

“The tensions have been heightened due to the threatened evictions of Palestinian families from Sheikh Jarrah. We are entirely opposed to efforts to expand settlements, demolish homes and evict Palestinians,” the group said.

Melbourne Post - April 7, 2021
0
Turkey has frozen the assets of 377 individuals linked to terrorist groups, including Daesh and the PKK, reports said Wednesday. The Treasury and Finance Ministry...

Let’s Build a Traditional City and Make a Profit

Rocket fired toward US Embassy in Iraq injures child