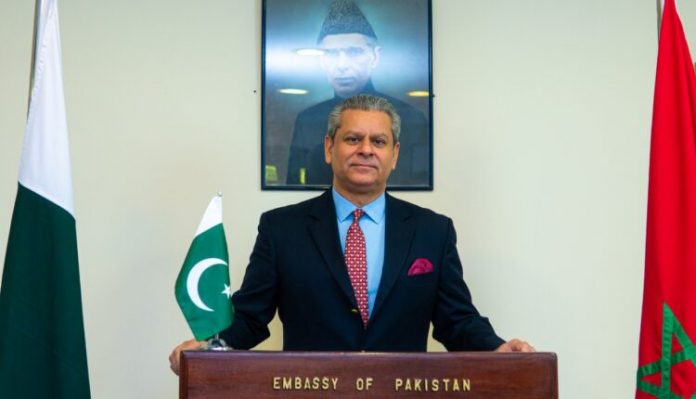 On December 8th, 2021 his Excellency Mr. Hamid Asghar Khan Ambassador of Pakistan to Morocco held a conference on the Extraordinary Session of the Islamic Conference (OIC) of Foreign Ministers which will be held in Islamabad on December 19th 2021.

His Excellency Mr. Hamid Asghar Khan Ambassador of the Islamic Republic of Pakistan to Morocco, stated that Afghanistan is currently facing a serious humanitarian crisis, noting that millions of people, including women and children, are in dire need of food, medicine and basic life necessities, and directly inviting all foreign ministers “l’OCI” to participate in the OIC conference.

The Ambassador of the Republic of Pakistan mentioned that Pakistan welcomed the initiative of the Kingdom of Saudi Arabia – Chairman of the Organization of the Islamic Conference (OIC) Summit – to convene a special meeting of the OIC Council of Foreign Ministers on the situation in Afghanistan, following Pakistan’s offer to host the session, which was scheduled to take place in Islamabad on 19 December 2021.

His Excellency also mentioned that Afghan people are in need of the total support of international community’s support including OIC as well as financial and in-kind support.

In a response to Morocco Telegraph’s question about the influence of Morocco on the humanitarian crisis in Afghanistan, Mr. Hamid Asghar Khan said that the idea of OIC was born in Morocco, it was an initiative of his Majesty King Hassan II who gathered the Muslim leaders in Morocco; so, Morocco is considered the spiritual home of the initiative.

He also mentioned that Afghanistan is one of the founder members of the OIC as well as Pakistan and Morocco.

Mr. Hamid Asghar Khan highlighted Morocco’s clear vision regarding emancipation of women as equal partners in the development of the nation. Stating that during the Covid-19 pandemic the government came out with a very good policy to assist people who have lost their jobs.

H.E also mentioned that in the new national development plan the number one emphasis is on the youth and children so that they can be educated and they can be provided with the skills to contribute towards national economy.

His Excellency also mentioned that Morocco is an important partner as it has the exact policy and philosophy that Pakistan needs, and that Morocco uses its influence on the other brotherly countries to assist Pakistan in this crisis.

US plans to close last 2 consulates in Russia, report says

Qatar to pursue efforts to stop Israeli aggression against Palestinians: The...

US military tells Iraq it is preparing to ‘move out’